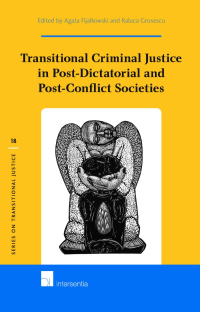 Agata Fijalkowski and Raluca Grosescu have co-edited a new book on “Transitional Criminal Justice in Post-Dictatorial and Post-Conflict Societies” (Intersentia, 2015). Here is its abstract :

This volume considers the important and timely question of criminal justice as a method of addressing state violence committed by non-democratic regimes. The book’s main objectives concern a fresh, contemporary, and critical analysis of transitional criminal justice as a concept and its related measures, beginning with the initiatives that have been put in place with the fall of the Communist regimes in Europe in 1989.

The project argues for rethinking and revisiting filters that scholars use to interpret main issues of transitional criminal justice, such as: the relationship between judicial accountability, democratisation and politics in transitional societies; the role of successor trials in rewriting history; the interaction between domestic and international actors and specific initiatives in shaping transitional justice; and the paradox of time in enhancing accountability for human rights violations. In order to accomplish this, the volume considers cases of domestic accountability in the post-1989 era, from different geographical areas, such as Europe, Asia and Africa, in relation to key events from various periods of time. In this way the approach, which investigates space and time-lines in key examples, also takes into account a longitudinal study of transitional criminal justice itself.